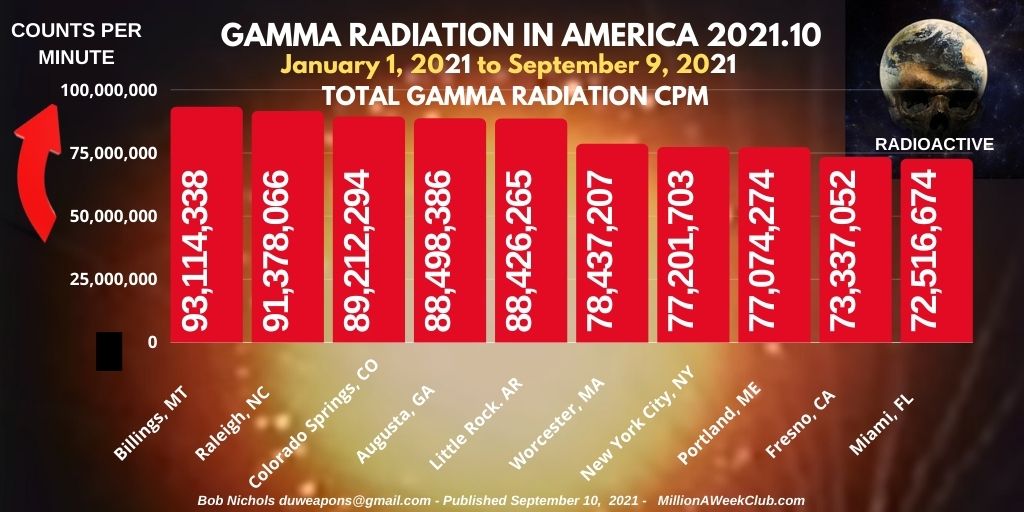 September 10, 2021 MILLION A WEEK CLUB Your Radiation This Week by Bob Nichols

VT Editor’s note:  We have been sitting on this
story. This is hard science, real evidence
and something is terribly wrong.  We do
not enjoy publishing this.

Mr President, the Reactors throughout the country are deadly and deteriorating more every day.

They all must be shutdown immediately to start the required 5 year cooking off period. Don’t let more people die unnecessarily, Mr. President.
.
Yes, this is all quite Insane. Use all your power and fix the radioactive sources.  All of them!
.
The reactors’ records are screaming they are “in big trouble.”
.
C’mon, President Biden, kill the reactors everywhere!
.
Save American lives.
Billings, Montana
.
The Billings, Montana radiation reading soared past the Total Gamma Count at America’s former H-Bomb making factory at Colorado Springs, Colorado June 30, 2021, a few days ago at this writing.
.
Be bold, President Biden, kill the reactors dead.
.
Bob Nichols
Writer