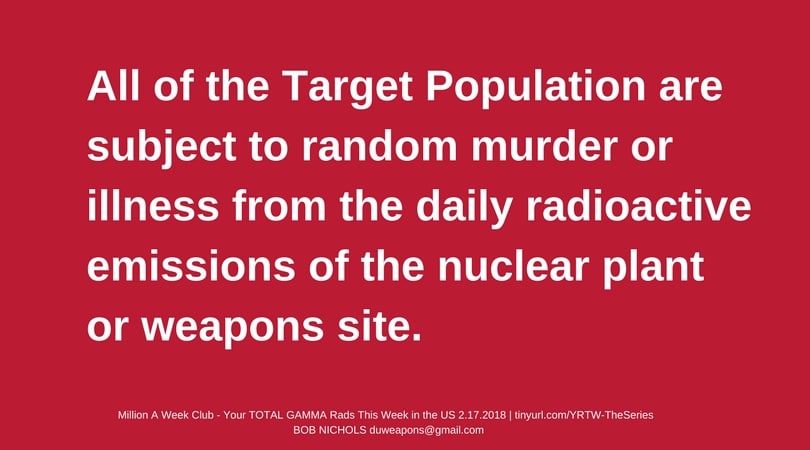 This is a Bad situation for all exposed to the Rad. Now included, for the 5th Week of 2018 just passed, all cities above 5,000,000 CPM Year to Date of deadly Gamma Radiation and its unpublished radioactive kin. A Count is One Radioactive Decay.

Target Population Column Added. A Column displaying the latest Official Census in 2010 in the surrounding area to the nuclear site is shown. it is the Standard Metropolitan Area Census Report.

All of the Target Population are subject to random murder or illness from the daily radioactive emissions of the nuclear plant or weapons site.

The US Government thinks that nuclear weapons and the huge supportive nuclear industry are required for the national defense. So there you have the problem set.

It’s been about 73 years now and no person or nation has convinced the US government to change the nuclear policy. Since the reactors leak Rads every day, and have since their construction; the nation is long past saving. There is nothing that can save it now.

Since Rad Records are still being processed, the alarming number of cities recording a Million Rads a week could climb further still.

Weapons and Reactors are the only source of Rads on this planet. Colorado Springs now routinely records a measured average of about 10,000 CPM per Hour. That is a … bunch.

Thirty-one US cities and Tokyo, Japan are listed. Tokyo is included for comparison purposes only, of course.