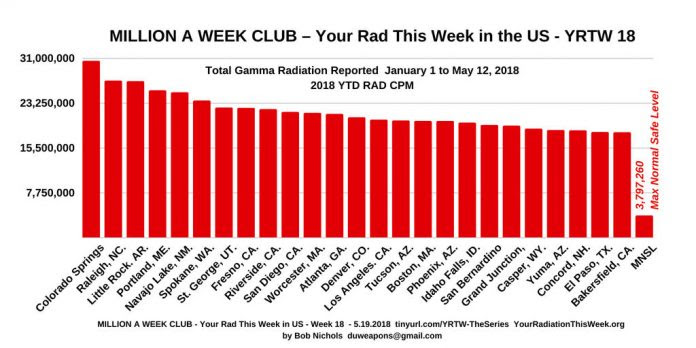 This is a Bad situation for all exposed to the Rad. Now included, for the 18th Week of 2018 just passed, all cities above 18 Million CPM [27] Year to Date [YTD] of deadly Gamma Radiation.

NOTE TO READERS: My editorial work is solely crowdfunded via PayPal. << Click here to donate >> Thank you.

Their killer attack on your body’s trillions of cells never ceases. It did not used to be that way back in the day. Killer cell assassins like Pu239 and its brothers were never around. That will be 29 cities above 18 Million Rad Counts so far this year.

Watch and also subscribe to videos at MILLION A WEEK CLUB – Your Radiation This Week.