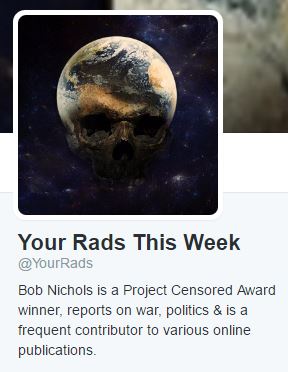 April 22, 2017 MILLION A WEEK CLUB Your Radiation This Week by Bob Nichols

The amount of Rad in the air Now Dooms Humanity to a relatively quick Extinction; Done In by our own war toys, how moronic is that!

Notice:  It is necessary for public health and because the many nuclear reactors are venting radioactive gases and steam at nights and on weekends that all residents must stay inside at nights and on weekends. Especially hard hit are the cities listed in YRTW ELE.  See the latest Your Radiation This Week for the most recent list of contaminated cities.

`
Good Day!  This is “Your Radiation This Week ” for the past 2 weeks. These are the recorded Total Gamma Radiation in CPM and Sievert measured highs that affected people around the United States.

YRTW ELE is published every two weeks on Saturday. ELE is an acronym for “Extinction Level Event.” The amount of Rad in the air now Dooms Humanity to a relatively quick Extinction; Done In by our own war toys, how moronic is that! I can’t say it any plainer than that.  The next publication dates are May 6 and May 20, 2017 on the Road to Extinction.