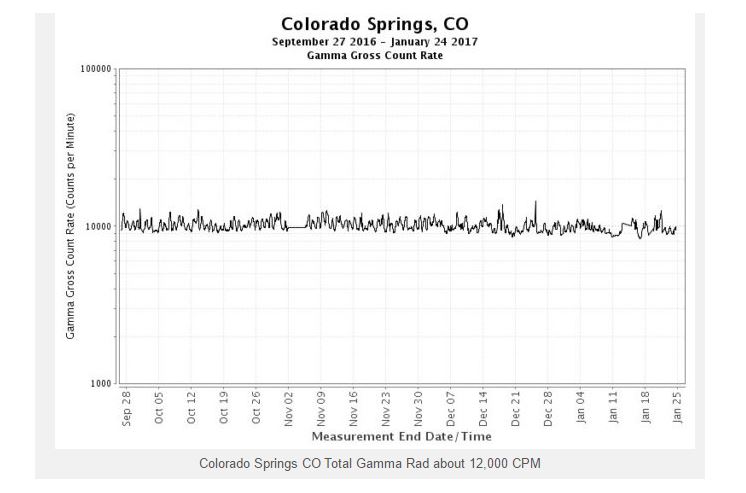 January 28, 2017 MILLION A WEEK CLUB Your Radiation This Week by Bob Nichols

(January 28, 2017) – Good Day, this is “Your Radiation This Week” for the past 2 weeks. These are the Recorded Total Gamma  Radiation Highs that affected people around the United States. YRTW  is published every two weeks on Saturday. The next publication dates are February 11 and February 25, 2017.

Listed in Counts per Minute, CPM, by the EPA (Environmental Protection Agency), a Count is one Radioactive Decay Registered by the Instrument. The Top Reporting Radioactive Cities are listed. The highest radiation reporting cities are listed by their Radiation Reading and alphabetically.

Still, all reporting cities are above normal. The reporting Radioactive Cities are a few of the radioactive cities in the States. Take all necessary precautions.

Copyright by Bob Nichols @ 2017: Reproduce and distribute
Give full attribution to Bob Nichols at duweapons@gmail.com

1. The Radiation charts and graphs of the EPA. Individual queries can be built at the EPA RadNet Query Builder.
2. The EPA based reporting of NETC, an LLC.
3. These stations’ Radiation equals Total Gamma Radiation. Gamma Radiation Monitors are reporting publicly at all these locations.
4. Reference: Digilert 100 Flyer pdf, “Normal background is 5-20 CPM.” Copyright @ 2015 Keison International Ltd – All Rights Reserved.
5. CPM. “Although we can’t see it, taste it, smell it or hear it we can measure radiation and observe its effects. One way to measure radiation which the United States Environmental Protection Agency [EPA] has chosen to use on its radiation websites is in Counts Per Minute or CPM. Each Count is One Radioactive Decay.” Quote from the ‘Your Radiation This Week’ Apr 3, 2015.
6. Radiation destruction of chitin, IAEA, by Ershov, B.G.; Sukhov, N.L.; Nud’ga, L.A.; Baklagina, Yu.G.; Kozhevnikova, L.G.; Petropavlovskii, G.A. (Institute of Physical Chemistry, Moscow (Russian Federation)
7. “Plutonium Air” by Dr Paolo Scampa, AIPRI Blog, Aug 19, 2016,
8. “Radioactive Fertilizer,” AIPRI by Dr Paolo Scampa, September 23, 2016, AIPRI: Les engrais radioactifs,
9. “Texas has highest maternal mortality rate in developed world, study finds,” By ABBY GOODNOUGH OCT. 19, 2016,
EPA Proposal Allows Radiation Exposure in Drinking Water Equivalent to 250 Chest X-Rays a Year
10. “Forty-five (45) years later, the Nuclear States officially raise the amounts of “permitted radiation levels” by hundreds and sometimes thousands of times to maintain the utter and absolute dominance of the Nuclear State over everything, everywhere, for all time. No tolerance given.” [10] “In the never ending war between the suits (politicians) and the physicists, the suits win yet again; by changing the rules. It takes more than logic to fight these animals and win.”
11. US Gov: Walk Slow  May 24, 2013
12. “Baghdad” by Dr. Paolo Scampa, AIPRI, Saturday 12 November 2016 http://aipri.blogspot.it/2016/11/bagdad.html
13. “News Release, New Aerial Survey Identifies More Than 100 Million Dead Trees in California,” USDA Office of Communications, “This brings the total number of dead trees since 2010 to over 102 million,”
14. Caribou herd in Alaska suffering from mysterious decline, November 30, 2016, Noel Kirkpatrick, MNN Mother Nature Network, “The Central Arctic caribou herd in Alaska is experiencing a “steep decline” in its population, and scientists are researching the reasons why.”
15. “Facing a Dying Nation,” a line from the 1979 Tribal Rock Musical HAIR. A scene with “Facing a Dying Nation” starring Treat Williams from the movie is here:  The character Pfc. Berger is KIA in Vietnam in 1968.
16. It is Eugen Wigner’s name as a Verb. It’s about all things Wignerized.
See Notes on Your Radiation This Week No. 69 and 70