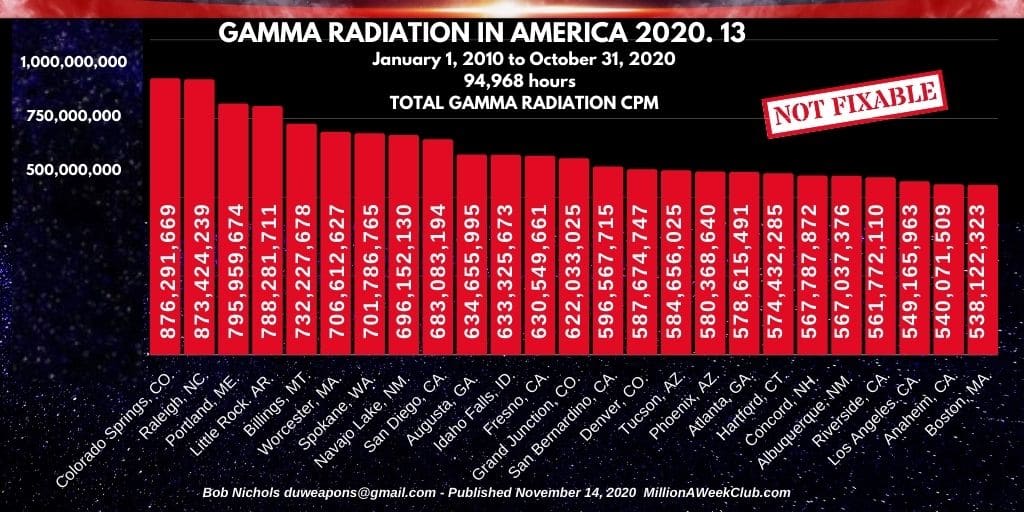 November 14, 2020 MILLION A WEEK CLUB Your Radiation This Week by Bob Nichols

NUKES STILL OUT OF CONTROL

Nuclear reactors are still out of control in Raleigh, North Carolina and Portland, Maine. The nukes have been since Putin’s RadCloud descended on the North East United States months ago.

The nations most populated area is plagued by radiation poisoning from surging nuclear reactors to the North and South and Russia. This does not end well.

Whether this was a Russian nuclear attack remains unexamined by officials.

Citizens and officials must do the right thing and shut these stationary nuclear weapons down. Realistically, The chances of that happening are Slim and None. Big money Rules the nukes.

The chances of the rich owners closing their poison factories are non-existent. If YOU live within 300 miles, or 480 KM, just leave.

If that was Putin’s plan – it worked as planned. Who was involved Stateside? President Trump? The question must be asked and the answer or answers found.

In ten years there has been Zero official publicity. Gamma radiation in America increased steadily over the past 10 years Plus and is well past the Kill you level. How much more Gamma radiation have you absorbed today?

I have no idea why the RadCloud “parked”. It could have been caught in a natural weather circulation above the North Eastern United States or caused by humans. Many countries have that capability.

Within days the Nuke Weapons Lab knew not only what country did it. They would also know the mine(s) that produced the Uranium and H-Bomb factories that made the Plutonium.

Does anybody think it was Trump’s pal Putin or local sold out rich guy nuke operators; or both?

Make no mistake about it the Perps will be found. President Trump should demand their arrest. Will he do that and stand up to Putin? Don’t have a clue.

However, I Do Know the unusual and dangerous RadCloud was “parked” over the North Eastern United States; it still is. That’s weird. That I know of, Not One, None, Zero, Zilch of the expensive TV Weather Caster operations “noticed” the RadCloud.

Gamma radiation in the wild escapes from nuclear reactors and detonated nuclear weapons.